Recovery options and recriminations topped the agenda at community meetings in the aftermath of the Wallangarra/Jennings and Tabulam fires.

Tenterfield mayor Peter Petty opened proceedings at Wallangarra Hall on Friday night stressing that it was a communication forum rather than a royal inquiry.

He said the community had been 'absolutely outstanding' in the face of such adversity, and was thankful there has been no loss of life or, as far as he knew, livestock.

Still 50,000 hectares was burned out, along with kilometres of fencing, feed reserves and, in some cases, water reserves.

Several landholders present who had been at the Jennings firefront expressed their frustration at missed opportunities to contain the blaze, and disregard for local knowledge and expertise.

Only five or six crews were dealing with the Jennings fire on its first day as it approached Mt Lindesay Road and the incident was classed as 'under control'. Mr Gascoigne said the locals knew otherwise, and that the next day was going to be a bad one.

"We need workable solutions," he said.

Others pointed out non-existent handovers between shift leaders and poor time management.

Rural Fire Service public liaison officer Paul McGrath said such issues should be raised at the debrief that will follow the fire event, where they can be dealt with in an effort to do better next time.

While Southern Downs Regional Council mayor Tracie Dobbie was present to represent the Queensland perspective, those with properties north of the border who had missed the earlier community meeting held in Ballandean were displeased they didn't have access at the meeting to information on Queensland recovery services.

Northern Tablelands Local Land Services general manager Paul Hutchings (who had his own property burned out in the Tingha fire) explained that emergency fodder had been supplied to NSW landholders from the Tenterfield Showground by appointment.

Now that the initial emergency period had passed, however, those without feed would have to resort to drought relief options.

Mr Hutchings said the job of the LLS now is to help people make decisions on how they will move forward.

He also advised that reparation for loss of fencing through fire or as a result of firefighting efforts is a matter for private insurance. The predicament of local farmers may, however, attract the assistance of a labour force group like Blazeaid.

Mr Petty said he is lobbying the state government for some assistance for those who have lost feed and fencing.

As audience-member Grant Johnston pointed out, even if we do get rain and some grass growth before winter, his cattle will end up in Warwick with no fences to contain them.

While there isn't much available in the way of grants, the Rural Assistance Authority (phone 1800 678 593) is offering concessional fixed-rate loans of up to $130,000 and transport subsidies for the carriage of livestock, fodder and water.

The RFS has tracking data to support claims for water reimbursement.

With many roofs covered in ash and possibly fire retardant, the RFS advised that downpipes be disconnect from water tanks for the first downpour.

If water tanks have already been contaminated (water with fire retardant gel in it turns soapy if shaken in a bottle, or is red as a result of fire retardant die), the water can still be used for irrigation, flushing toilets, firefighting and clothes washing (if it doesn't stain the clothes).

"Take care if you're on the roof," Mr McGrath said.

"One person had already been hospitalised from cleaning off their roof."

While the cause of the Tabulam fire was quickly established after a woman called 000 after a backyard burning got out of control, a report on the cause of the Wallangarra/Jennings fire is yet to be released. It has been established, however, that the blaze started on the Queensland side of the border so Qld Fire and Emergency Services is the investigating body.

Cross-border firefighting issues in regard to communication, coordination and even compatibility of fittings will be addressed, as will liaison with army depots on both sides of the border in regard to no-fly-zones affecting waterbombing options.

"We thought we were on top of these (cross-border) emergency services," Mr Petty said, "but we're hearing from people on the ground that we're not."

Mr McGrath urged Wallangarra and Jennings residents to formulate a cross-border community protection plan, as one tool to better deal with future emergencies.

"There's no silver bullet," he said.

'Every fire is different."

Lack of communication between RFS personnel and landholders was cited as a major concern. Several landholders pointed out that while those on the ground did an admirable job, they were let down by administrators who should have been overseeing the communication aspect.

Paul Best of the RFS pointed out that when a fire starts, it's as chaotic in the office as it is in the field, and urged people to stay informed via online services.

RFS crews also had their own challenges in helping people in the fire's path, with some refusing to leave their property. Others pinned signs to their entry gates saying 'RFS, stay away'.

"Some people say, 'leave the house, save the shed'," Mr McGrath said, even though the firies are trained to protect property.

Veteran RFS volunteer Rod Dowe said everyone involved is human and under a lot of pressure at that. He feels the root cause of the infernos is anti-clearing legislation.

He was supported by Gary Verri who said if the aborigines had managed the country like we do today, nothing would exist. He said woodland of four or five trees a hectare had degraded into eucalyptus scrub, creating ample fuel for fires. The west of Mt Lindesay Road, which was recently razed by fire, survived last week's inferno better than the eastern side. Photo by Gary Verri.

At the meeting authorities were urged to turn roads into wide corridors to act as fire breaks, and to maintain the fire trail that Mr Johnston and Mr Dowe have now bulldozed between Mt Lindesay Rd and the New England Highway. 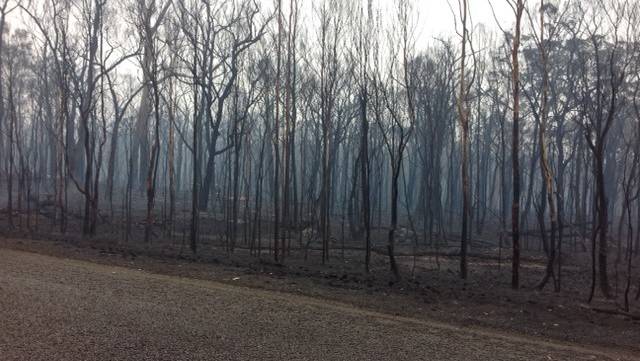 The eastern side of Mt Lindesay Road had a build-up of fuel, and was devastated by the fire. Photo by Gary Verri.

"Put gates instead, then we'll be set for next time."

Both Mr McGrath and Mr Petty supported the idea on behalf of the RFS and Tenterfield Shire Council respectively.

Mr McGrath urged landholders to lodge formal hazzard complaints against neighbours that presented a fire risk-- be they council, Forestry, National Parks or private landholder -- as the complaint then has to be dealt with.

"Change is not led by agencies, it's led by people," he said.