A firefighter has been seriously injured fighting the blaze south of Tenterfield.

The firefighter has been airlifted to Sydney for burns treatment after suffering significant burns to his face hands and airways while fighting the blaze south of town.

Tenterfield Mayor Peter Petty says the latest estimates are that five houses have been destroyed in the fire.

But with winds taking the blaze south-east to east, he said the town is officially no longer under immediate threat, but that the RFS would now have to defend rural properties in the path of the fire. 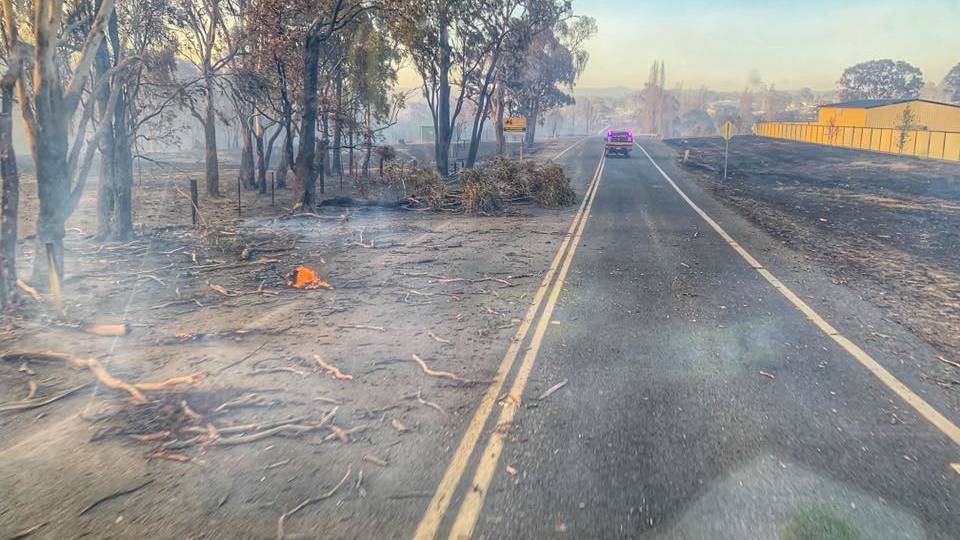 Mayor Petty warned against complacency saying the blaze could later change direction and head back towards town.

He said the situation this afternoon was so desperate some residents were forced to fend for themselves, deploying hoses to fight back the blaze.

"Bless them but the RFS can't be everywhere," he said.

Post by Narrabri Fire and Rescue are currently in Tenterfield forming part of “Strike Team Oscar”..

An evacuation centre has been established at the Tenterfield showground at 62 Miles Street, Tenterfield.

The centre will be open today until 11pm.

At least two homes have been destroyed and others are under threat as fire crews battle an out of control blaze on the outskirts of Tenterfield.

Fire and Rescue spokesperson Superintendent Rob Jansen has confirmed the destruction of homes in Clifton st and Billirimba Road in Tenterfield this afternoon.

Fire crews managed to save a home in Scrub Road, with a crew able to control a grass fire around the home.

Superintendent Jansen said three Fire and Rescue trucks are working in town, with another five on their way to assist RFS crews with the intense blaze.

Fire and Rescue crews are currently working near the Saddler's Estate south of town, he said.

"Our firefighters in the field, from all agencies, are experiencing erratic fire behavior across the fire ground 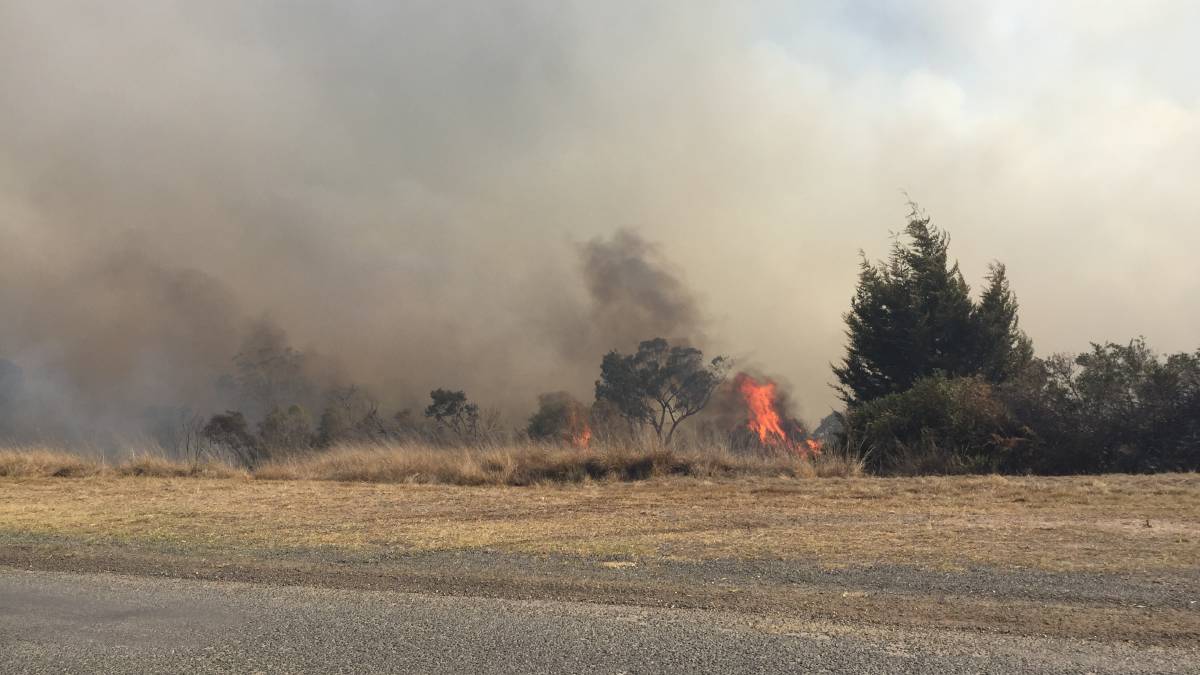 "And the advice we're providing to all the residents in this area is seek shelter as the fire approaches.

"They've got to protect themselves from the heat of the fire."

He said the weather conditions driving strong winds from the west are likely to continue to Saturday.

All of Tenterfield's schools have been evacuated and power has been cut to parts of town, though it's since been returned.

The fire is burning in the Mount Mackenzie Road area, on the southern outskirts of Tenterfield, heading south east along Scrub Road. 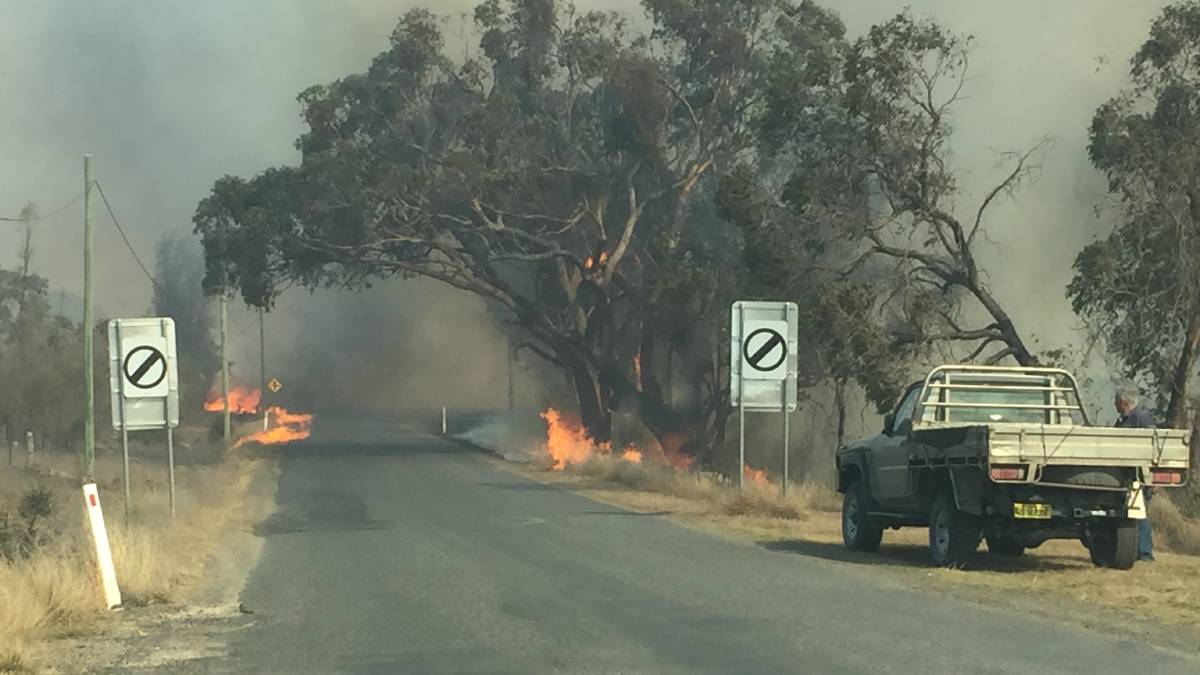 A fire in a remote area south-west of the village of Drake is out of control. Residents in its path are advised it is too late to leave.

RFS advise the fire is more than 153 hectares in size and is within the Girard state forest.

The fire has crossed Long Gully Road, Rocky (Timbarra) River and is heading in an easterly direction towards the Clarence River.

RFS advise residents in Ewingar, Tilbaroo and areas on the western side of the Clarence River they should seek shelter as the fire approaches.

An RFS update warns residents in the area to take shelter in a solid structure when the fire front arrives.

The emergency service warns residents caught in the path of the fire they may die or be injured.

The RFS has updated their advice, warning residents in threatened homes it is now too late to leave.

Residents should seek shelter as the fire approaches, and protect themselves from the heat of the blaze. 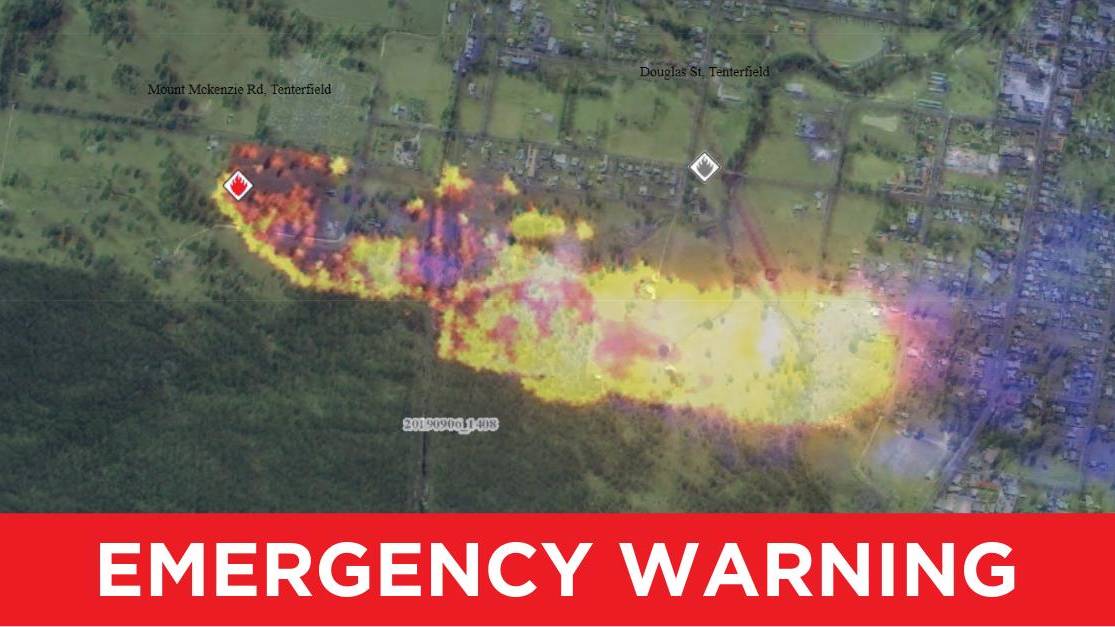 RFS have issued an emergency warning for a blaze burning out of control, which threatens homes on the outskirts of Tenterfield. Picture: RFS Twitter.

Tenterfield Mayor Peter Petty said the fire came on extremely suddenly this afternoon and has already destroyed at least one home.

"I'd be very surprised if that's all we lose," he said, saying the conditions remain dangerous.

The blaze is currently around 500 metres from the centre of town, he said, with between 10 and 12 fire crews tackling the fire.

All of Tenterfield's schools have been evacuated and power has been cut and returned to parts of town.

The fire is burning in the Mount Mackenzie Road area, on the southern outskirts of Tenterfield, heading south east along Scrub Road.

A bush fire is currently burning out of control on the outskirts of Tenterfield, threatening homes.

RFS issued an emergency warning for the blaze this afternoon.

The fire is burning near Mount Mackenzie road and heading towards homes in Laird Street, Francis Street, King Lane, Scott Lane and Trail Lane, outside Tenterfield. It has already crossed Young Street.

RFS advise the fire is currently out of control and have issued advice that residents should check and follow their bush fire survival plan.

They advise residents who do not have a plan to decide what to do if the situation changes. RFS say leaving early is the safest option.

There is a total fire ban in force today, and the fire danger level is set to extreme.