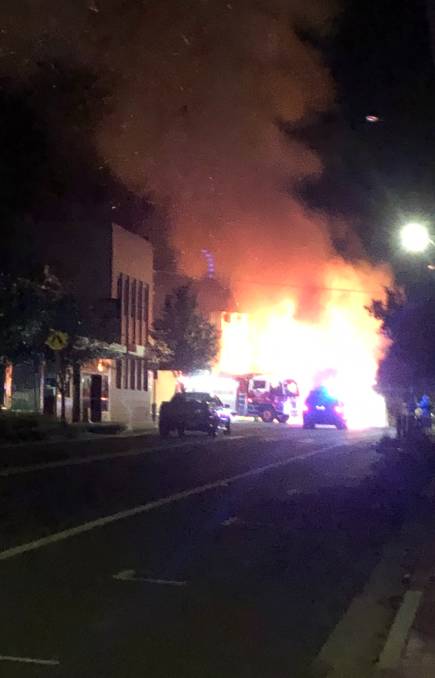 +15
Photos by Tenterfield Fire & Rescue and others.

Mayor Peter Petty is frustrated it took a trailer fire in the middle of Rouse Street last week to put the town bypass back on the agenda, but that council will continue to push for the project to progress.

He thanked the truck driver for disconnecting the prime mover and A trailer of the B-Double assembly and moving them clear of the alight B trailer.

"If he had panicked and run, the whole CBD could have been alight," Cr Petty said.

He said it's also lucky that the trailer was carrying cardboard and not a toxic chemical load.

"That would have been in Tenterfield Creek in seconds, not minutes," he said.

MP Barnaby Joyce feels it's yet more proof of the need for a heavy vehicle bypass around the town.

The incident happened in the early hours of Friday morning when the B-Double trailer caught fire, leaving just a smouldering shell in the town's main street and forcing the closure of the New England Highway.

Nearby shops suffered some damage before authorities extinguished the blaze. Luckily no-one was hurt.

"Imagine what could have happened if the prime mover caught alight with all that diesel on board," Mr Joyce said.

"Many shops probably would have burnt to the ground, including my Electorate Office which is just 50 metres away.

"This is why we need a Tenterfield Heavy Vehicle Bypass," he said.

The incident has cemented rather than converted opinion on the prospect of a bypass, according to Tenterfield Chamber of Tourism, Industry and Business head Kristen Lovett. She said while the fire did raise awareness of the risk of accidents that may threaten the main street, she hadn't experienced a change in people's perceptions about a need for the bypass.

"Those of the view that a bypass could detrimentally impact local business are still of that opinion whilst those in support of the bypass see this as another example of why this should be further pushed and executed.

"The business community are extremely aware of how lucky the main street business houses are as a result of the quick action of our emergency services."

While a town bypass has been on the cards for decades, Ms Lovett said the town has made great strides in recent years in promoting itself as the prospect of a bypass firms up.

"From personal experience, when I would tell people I was from Tenterfield five years ago, people would ask where that was, and now they all have a comment on how beautiful Tenterfield is or have some knowledge or experience with the town.

"So from a marketing and awareness viewpoint, as a town Tenterfield has better positioned itself for being known as a destination.

"I do acknowledge that this needs to continue however, and through events such as the Autumn Festival and the soon to be held Sesquicentennial celebrations by Tenterfield Shire Council, this brings people to town to enjoy our climate, natural attractions, our retail and what the township has to offer.

"Marketing and advertising are also vital in keeping the awareness high and showcasing Tenterfield, but this is the case for any business community regardless of a bypass. It's about the longevity of the local and tourism economy."

In 2016, the federal government provided $10 million to continue planning for the bypass, including the development of the concept design, Review of Environmental Factors (REF), property acquisition and detailed design.

The project includes 4.5 kilometres of new road, starting just north of the Tenterfield Creek Bridge on the southern edge of town, running west of the rail line and re-joining the existing New England Highway north of Tenterfield.

"The NSW Minister for Regional Transport, the Hon Paul Toole MP, has told me that Transport for NSW remains committed to continuing the development of this project, in line with the Australian Government's funding commitment," Mr Joyce said.

"I understand the REF will be displayed for community feedback sometime this year.

"When I was elected as the Member for New England, I promised to do all I could to build a bypass around Tenterfield.

"I will continue fighting to get this done for everyone's safety," he said.

Tenterfield Police Sergeant James Boaden said his officers heard the first two bangs, which were trailer tyres exploding, from the Police Station at 1am that Friday morning.

By the time the third tyre exploded they were in Rouse Street, directing the driver to disengage the prime mover and Trailer A, with Trailer B already well alight.

The B-Double had been travelling from Brisbane to Tamworth delivering a load of flat-packed cardboard boxes. Police report that that the truck was fully-loaded with 10 tonne of cardboard in each trailer.

The rear trailer axle seized, causing the tyres to explode. The driver was attempting to fight the fire with a small extinguisher, without success, when police arrived and alerted emergency services.

He could see on his way to the station that the prime mover and A trailer had already been unhitched and moved down the road, and the B trailer was fully alight when the crew arrived, and all six of its tyres deflated.

Capt Gray said his team's primary objective on arrival was protecting adjacent properties on the eastern side of the street, dampening down the shopfronts and the cardboard load.

Shop windows on both sides of the street received major cracks and road bitumen was left buckled in the aftermath.

Capt Gray said crews managed to contain the fire within itself but without a prompt response it could have spread to the three shops nearby.

Fire crews left by 9.30am after a massive cleanup, with the remainder of the trailer contents pulled out onto the road and wet down to eliminate any further risk and prepped for transport to another site. The highway reopened at 10am.

"It could have been a lot worse," he said.

Apart from the increased risk of injury to passersby he said it can be a logistical nightmare when such incidents occur at peak traffic times, and dealing with onlookers can sometimes be an issue.

"We had fewer people to deal with.

"It would have been a lot easier if it had happened out of town, but we dealt with the situation we had and it was a good outcome."

Sgt Boaden said a mechanical fault has been blamed for the incident, possibly exacerbated by the truck breaking as it entered the 40kph zone. No charges will be laid.

He is also thankful that it happened in the dead of night.

"If it had of been lunchtime on a Saturday, it could have been a disaster," he said. 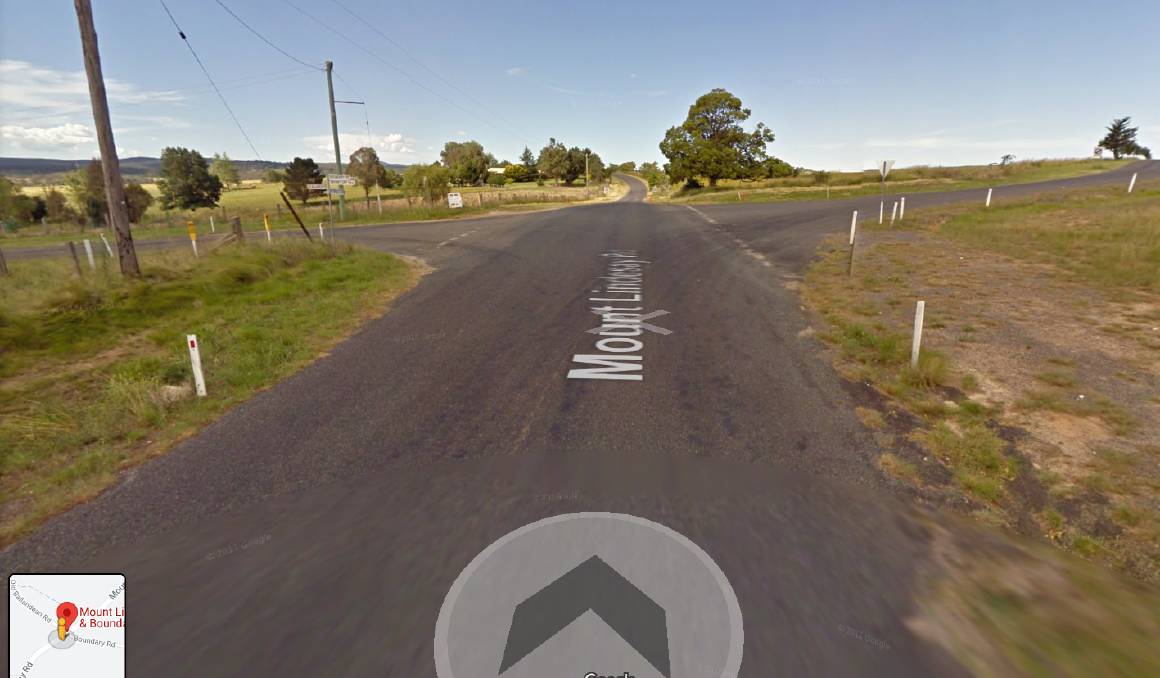 Increased traffic: Both council and police are pushing for a roundabout at the Boundary Rd/Mt Lindesay Rd intersection to reduce the risk of more fatalities. Source: Google Maps.

While this truck was heading south down Rouse Street and presumably wouldn't have been travelling through town had a bypass been in place, contentions continue over the route to be taken by large vehicles travelling from the east via Bruxner Highway and joining New England Highway.

Cr Petty said the route council is pushing takes vehicles off the Bruxner Highway into Bellevue Road, left into Boundary Road past the saleyards, through the Mt Lindesay Rd intersection and along Old Ballandean Rd to join New England Highway, where they then go north or south.

He said council will be advertising this route more vigorously and encouraging truck drivers to use it.

Council is lobbying for a roundabout at the route's Mt Lindesay Road intersection, which has already been the scene of accidents including a fatality.

"The RMS (Roads and Maritime Services) is encouraging us to pursue this," Cr Petty said.

A roundabout also has Sgt Boaden's support, given he attended the fatality and then a second accident at the same spot six weeks later which could have ended the same if the car had been just a metre forward and back.

He said a roundabout would not only force vehicles to slow down but would put any collisions at an angle rather than a so-called t-bone.

He's also concerned that GPS systems are sending those travelling from the coast to Stanthorpe on that route, as happened in these two incidences. He can see traffic increasing in the event of a bypass, with the intersection made dangerous by the dip in Mt Lindesay Rd obscuring oncoming traffic from drivers approaching from the side roads.

Cr Petty said the Old Ballandean Road/New England Highway intersection -- "a mongrel intersection" -- also continues to be of concern and council is pushing for further improvements there as well.

There is a length limit for vehicles that opt to turn from Bruxner Highway (High Street) onto Rouse Street but, as Cr Petty said, even vehicles within this limit can have their nose practically through the Ray White Rural window when navigating the turn.