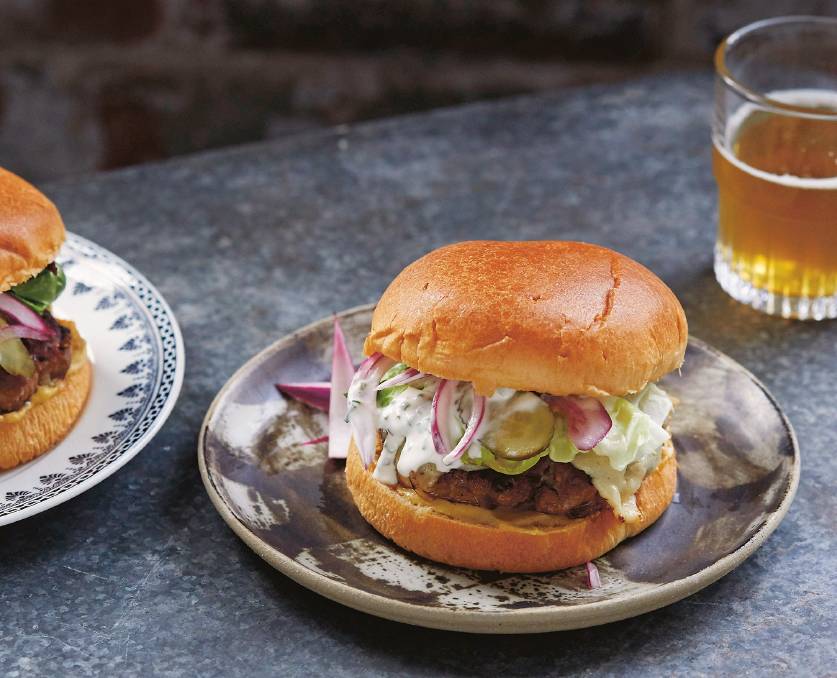 In the Baltics, two worlds meet: the Baltic Sea joins Eastern Europe and Scandinavia, bringing with it culinary influences and cultural exchange.

All three Baltic capitals - Vilnius, Tallinn and Riga - are UNESCO World Heritage Sites, steeped in history and culture. Amber & Rye explores this exciting part of Eastern Europe, guiding you around the capitals, sharing stories and discovering a dynamic, new style of cooking.

Contextualised within the Baltics' rich history and culture, this food is a doorway to a deeper understanding of the region and what makes it tick. 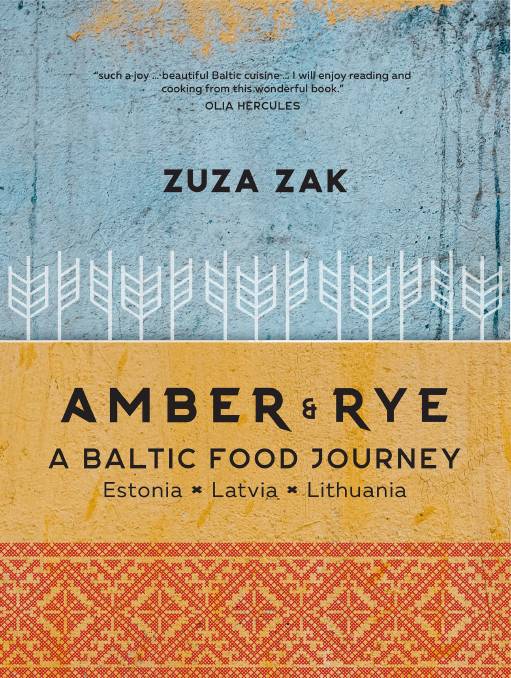 Tiny Muhu sits huddled next to Saaremaa - Estonia's largest island - and it is often seen as merely a stopover on the way to its bigger, more interesting neighbour. Yet I fell in love with the sparse, minimalistic beauty of this place beyond time, and wished I could have stayed longer. Muhu is known for its orange-and-black ethnic folk art designs and the quality of its lamb. Estonia is generally burger-obsessed, and all the burgers I ate there were excellent; however, it is to Muhu that my mind returns whenever I eat a lamb burger now.

4 slices strong cheese, such as Cheddar

2 tsp mild mustard, such as Polish Sarepska or Dijon

1 gherkin in brine, drained and sliced

1. Heat a little rapeseed oil in a frying pan over a medium heat. Add the shallot and fry until golden, then transfer to a large mixing bowl and allow to cool.

2. For the sauce, combine all the ingredients in a small bowl.

3. Spread out the flour on a large plate.

4. Add the minced lamb and paprika to the shallot bowl and season with salt and pepper, then mix with your hands, squishing the meat to bind the mixture together. Shape into four flat patties roughly the same size as your brioche buns, remembering that the burgers will shrink a bit as they cook. Roll the burgers in the flour to coat, shaking off any excess.

5. Pour a 5mm depth of rapeseed oil into a large frying pan over a medium heat. Once the oil is hot, add the burgers (depending on the size of your frying pan, you may need to cook the burgers two at a time) and cook for four minutes for medium-rare. Turn and cook for two minutes on the other side, then top each burger with a cheese slice and cook for another two minutes.

6. Slice the brioche buns in half and spread the bottom half with mustard. Put a burger on each one, then top with a lettuce leaf, gherkin slices, soaked red onion, fermented celery and carrot and some sauce. Cover with the other half of the bun and eat. 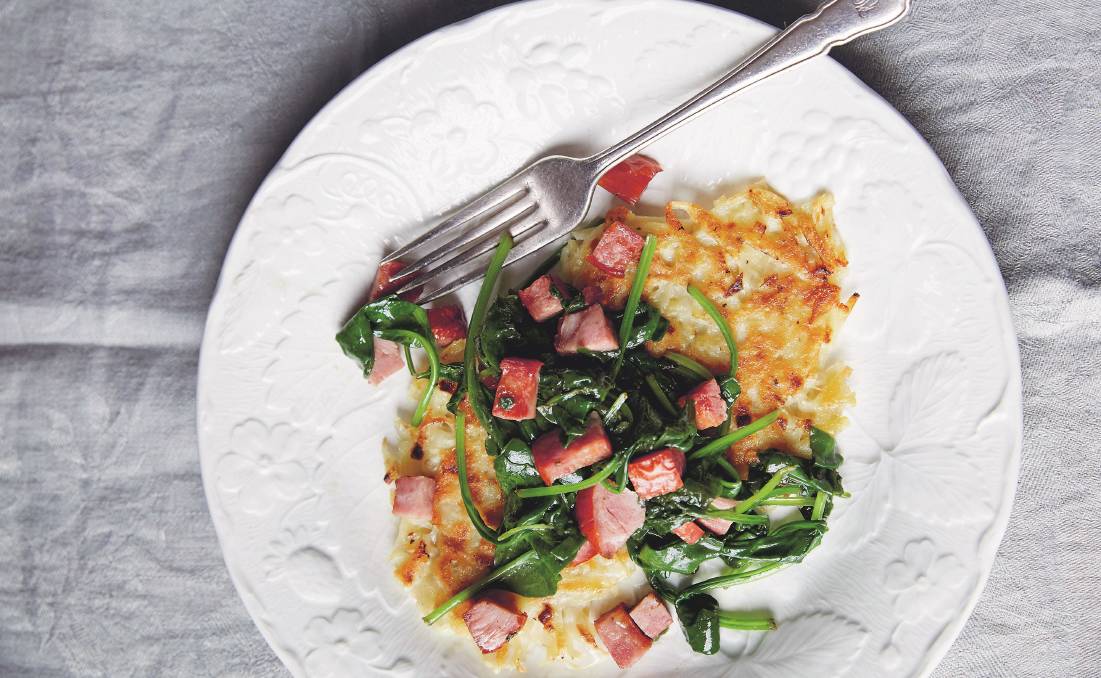 Potato-hash pancakes - or latkes in Yiddish - are known as a traditional part of Jewish cuisine. It's not surprising, therefore, that they are also commonplace in Lithuanian cooking, since Lithuania (like many Eastern European countries) had a huge Jewish community prior to World War II. For hundreds of years, recipes, ingredients and techniques were shared in a way that makes tracing their origins impossible; luckily, it's also unnecessary. Likewise, I find it unnecessary to peel the potatoes unless they are looking a bit worse for wear.

Some may find the kiebasa sausage a surprising addition here, given the Jewish name of this dish, but it's delicious. You can, of course, use kosher sausage instead, if you prefer.

2. For the latkes, coarsely grate the potatoes into a large bowl. Add the shallots, egg and flour and mix well. Season generously with salt and pepper.

3. Heat a thin film of rapeseed oil in a large frying pan over a medium heat. Once it's hot, add tablespoonfuls of the potato mixture to the pan, working in batches and taking care not to overcrowd the pan. Flatten the latkes with your fork and fry for about two to three minutes on the first side, until golden, then flip and cook for another two to three minutes on the other side.

4. Drain the cooked latkes on paper towel and keep warm in the oven.

5. Add a little more oil to the frying pan and add the sausage. Fry until it crisps up, then add the spinach. Once the spinach has wilted (this will only take a minute or so), add a squeeze of lemon juice and season with salt and pepper.

6. Serve the sausage and spinach on top of the latkes. 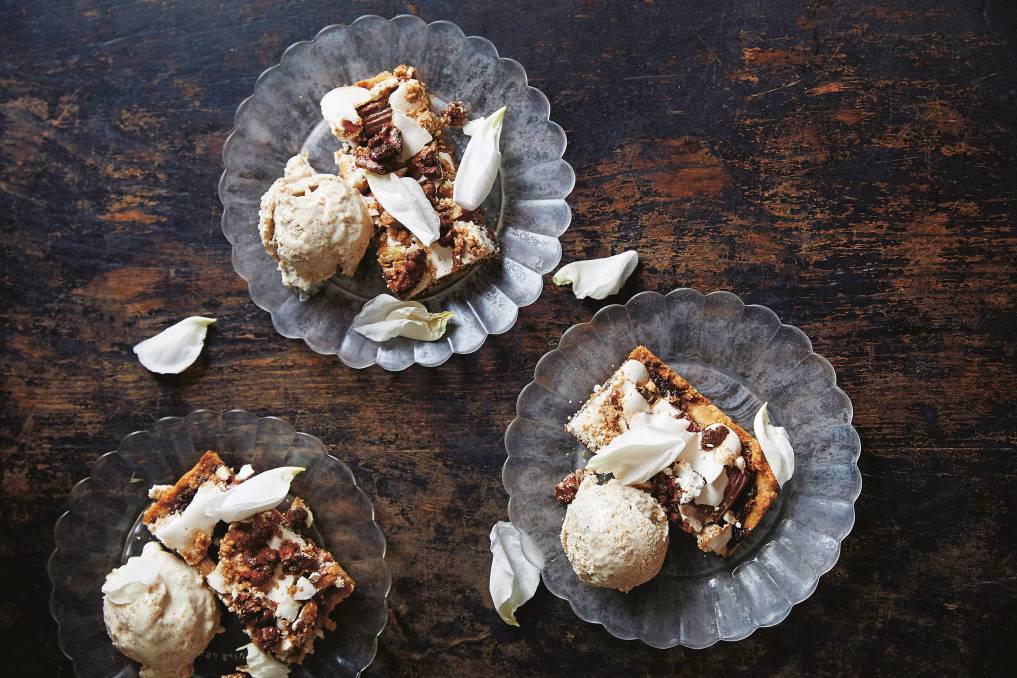 For the crumble topping:

1. First make the pastry. Put the flour, baking powder, ground almonds, coconut oil, sugar and salt into large bowl. Rub together with your fingertips until the mixture resembles breadcrumbs. Now add the aquafaba and use your hands to bring the dough together. Keep kneading until soft and smooth, then shape the dough into a ball, wrap in plastic wrap (or eco-wrap) and chill in the fridge for 20 minutes.

2. Preheat the oven to 180C and lightly oil a baking tray measuring about 30x20cm.

3. On a flour-dusted surface, roll out the dough into a rectangle roughly the same size as your baking tray. Gently lay the pastry in the tray, pressing it out evenly. Use a fork to prick the pastry all over, then bake for 15 minutes or until lightly golden.

4. Meanwhile, toast the nuts and brown sugar in a dry frying pan over a medium heat, stirring often, until they begin to caramelise. Set aside to cool.

5. For the crumble topping, put all the ingredients in a bowl and rub together with your fingertips until they resemble coarse breadcrumbs.

6. Remove the pastry base from the oven and set aside to cool, then turn the oven down to 160C.

7. Next make the meringue by whisking the aquafaba to soft peaks. Slowly add the sugar and keep whisking until you have a smooth and glossy meringue that stands in stiff peaks.

8. When the pastry base has been cooling for about 15 minutes, spread with the jam. Put the rhubarb in a bowl and toss with the rosewater, then arrange in rows on top of the jam. Place the caramelised nuts in the gaps between the rhubarb. Spoon over the meringue, spreading it out evenly, then sprinkle with the crumble topping.

9. Bake for 1 1/4 hours until the meringue is cooked and the rhubarb is tender.

10. Allow to cool completely in the tin; as this tart is quite wet, you may want to serve it directly from the tin as well. Scatter with the rose petals, if using, just before serving. 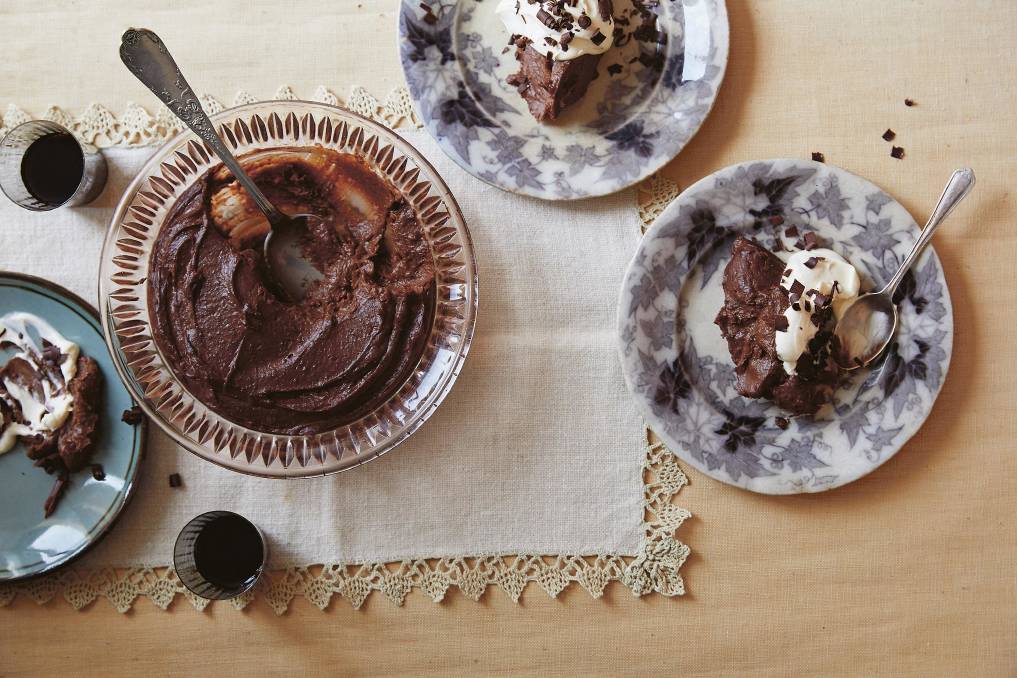 If, like me, you love a chocolate mousse but want to try something a bit different, look no further. This mousse is based on a popular dessert called "bread soup" - I found that if you thicken it a little more, it becomes a rich, chocolatey mousse with a hint of rye and caraway. If you're using Eastern European bread, it may well already be flavoured with caraway, so you might be able to skip the caraway seeds.

2. Spread out the bread cubes on a baking tray and bake for 20 minutes until dried and crisp.

3. Put the bread and caraway seeds (if using) into a large saucepan, cover with 250ml of water and leave to soak for 20 minutes, then add the sugar and bring to the boil, stirring often so it doesn't burn.

4. Mix the semolina with the apple juice until you have a smooth paste, then add to the pan. Bring to a simmer and stir constantly for about 10 minutes or until it has thickened to the consistency of thick porridge.

5. Break the chocolate into chunks, add to the pan and stir until melted. Tip the contents of the pan into a food processor and blend until very smooth - this could take up to 10 minutes. Scrape the mixture into a bowl and leave to cool slightly.

6. Using a large metal spoon, gently fold in most of the whipped cream, saving some for serving, then chill the mousse in the fridge for about half an hour or until set.

7. Serve with the remaining whipped cream and some shavings of chocolate.

This story Take a Baltic food journey without leaving your kitchen first appeared on The Canberra Times.