Traversing Australia from Shark Bay in Western Australia to Byron Bay NSW by foot is not as hard as you might think.

As long as you have five wonderful mates with you. But it does help if they have four legs and a hump.

Sophie Matterson, 33, (It was her birthday on - September 27 - and she celebrated in Texas) is, about to cross through parts of Tenterfield Shire.

With luck, she is only two months away from completing her great adventure, hoping to make Byron by Christmas.

She was in Goondiwindi for a well-earned break recently. It was time to re-fresh and get ready for perhaps, the most difficult part of her amazing trek across this wide, brown, beautiful, soul-searchingly and terrifyingly immense, sometimes mystifying and often dispassionate land: civilisation.

"I feel as though I re-entered life as we know it (around Hebel in "Outback" Queensland - Population around 70)," Sophie said. And ever since she's been preparing for "chaos". "I'm really not looking forward to bringing the camels into the middle of Byron Bay in the middle of summertime. Maybe I can sneak in without anyone knowing," she said. Something we doubt.

She's hard to miss especially with mates Jude, Delilah, Mac, Charlie and Clayton in tow, four camels who until a little over two years ago were roaming free around Uluru.

It's been a long trek to reach the New England region. For them, and Sophie. Even more so when you consider it all began for the Brisbane girl in Hong Kong 32 years ago and who "bounced around the world" before her English Dad, Ed, a banker, and her "Aussie" Mum Sandy settled in "Brisvegas".

Hong Kong was followed by Paris and then the Sunshine State. "Sadly my French is appalling."

Her "camel" is better. For most of school years she was a "typical teenager" before life led her into a career in film and television.

"Nothing high profile, I was just a jack-of-all-trades".

But unbeknown to Sophie, film was about to change her life, dramatically

After returning from overseas, Sophie craved something different.

By happenstance her friend Georgie's Aunt owned a camel dairy on the Sunshine Coast. ("Yes they milk camels.

For the curious: While camel milk has been consumed by humans for more than 6000 years, worldwide demand has grown markedly in recent years. On a nutritional level, camel milk is richer than cow's milk in vitamin C, vitamin B, iron, calcium, magnesium and potassium. Thanks Wikipedia)

"From the moment I met those camels I just fell in love with them. I loved animals and I found camels so interesting and unique similar to horses but a whole new thing to learn.

"I just dove in head first."

"I just wanted to learn everything I could about them."

Then fate played a hand.

Sophie saw the film, Tracks, an adaptation of Robyn Davidson's memoir of the same name, chronicling her 1977 nine-month 2,700km journey from Alice Springs to the Australian west coast.

"I sort of got camels on the brain."

That obsession has taken her to The Flinders Ranges, Lake Eyre and The Tirari Desert, Uluru, Michigan USA, Texas and Rajasthan India, and all so she could learn more about the animal which, according to Robert Irwin - The Englishman not the Aussie animal lover and son of Steve - has been described as "half snake, half folding bedstead".

Don't mention that to Sophie. To her they are her "family and best mates". 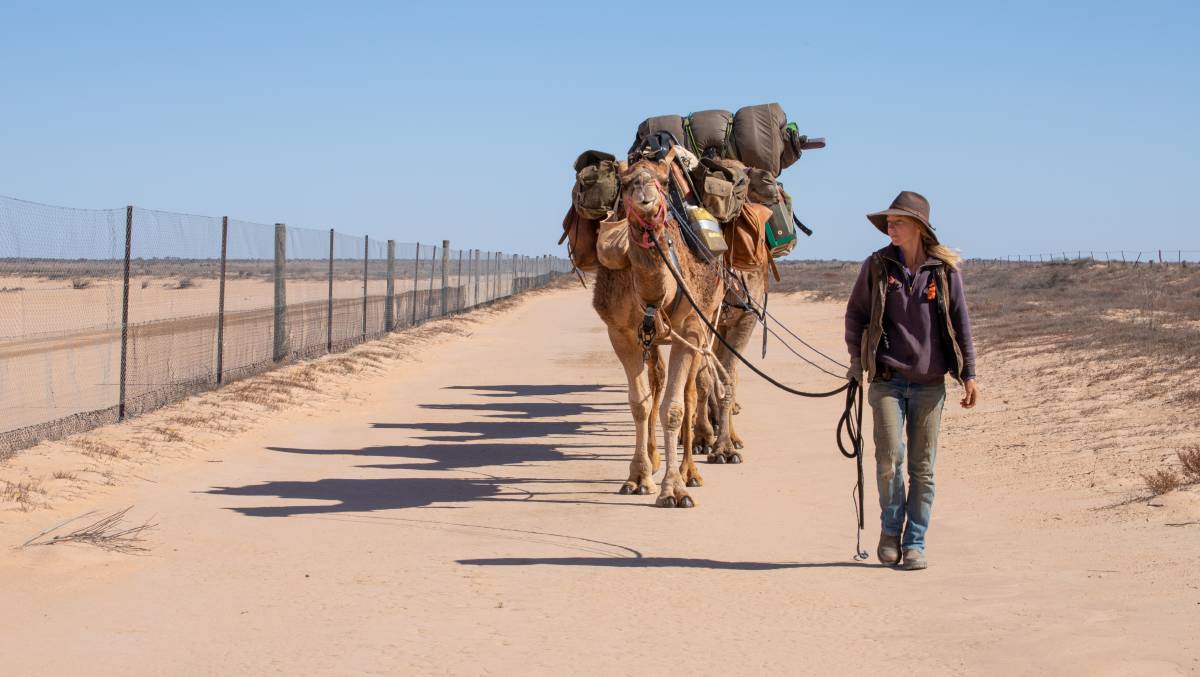 The love is mutual.

They come, slowly, ploddingly slow but with a ponderance which suggests Sophie is their world.

They nuzzle woman and camel, and life, slows, down as forehead meets muzzle and the world fades away, nosy journalists forgotten as the clocks stop.

But to get there, she went to Michigan working with the Amish where she milked camels.

In Texas she learned more and then she lived with the nomads in India before working in The Flinders Ranges working for camel trekking company, Treks Australia.

It was there that a thought took shape.

"We did nine day tours, camping out. I began to learn how to be out in the Outback.

"And one day I thought, I really love this. I want to do my own trek."

That thought took her to Uluru and Alice Springs, where Robyn Davison's began her world-famous journey.

She worked for Uluru Camel Tours owned by Chris Hill, who significant, mustered his own camels and made his own saddlery.

That was 2018 and from it all began to move quickly.

In early 2019 she and Chris rounded up five camels, Jude, Delilah, Mac, Charlie and Clayton. And in April 2020, all six of them were at Shark Bay, Western Australia, dipping toes and hooves into the Indian Ocean.

There is some irony there we thought as we look at a picture of Sophie and these ships of the desert, high-stepping through turquoise waters.

So the adventure began. Bedding down for the night.

Robyn Davidson's opens her memoir with: "I experienced that sinking feeling you get when you know you have conned yourself into doing something difficult and there's no going back."

It didn't take long for Sophie to realise her experience travelling inward to Australia's heart, was going to be a test of more than physical endurance.

East of Shark Bay is the Western Australian mulga shrublands.

There's little reason to be there unless you're a miner, a lost sheep or cow or a girl from Brsibane and fie camels a long way from home.

"We were still getting used to it all and each other, camels weren't used to the routine, I wasn't....It was so hot in April.

It was a place for harsh lessons.

They were often dry and abandoned years before.

She survived by being close enough to "civilisation" where a friend was able to drive out with water.

They were only three weeks in. This Australia was different to the one she had grown up. It was "so big and vast and overwhelming."

Her main concern, her camels.

"I'd turn up at a camp, in tears what are they going to eat, they were thirsty. Just the worst feeling when you can't feed your animals, so, I just curled up in a ball.

"What have I done. I'm so sorry I've bought you on this horrible adventure, she told them.

Which is when she understood the truth of Robyn Davison's words.

"Then I realised no-one was coming to save you, you're the only one here.

"No-one is injured, I'm fine, they're fine, tomorrow is a new day and there's nothing to do but move on.

"Just get up and move, and stop wallowing, you can't do that, because you have five camels to look after."

Which is what she did.

"I realised I wasn't going to achieve anything by sitting in a heap and crying."

And as simple that, her trek became a voyage of discovery, not of our wide, brown land, but herself.

"I learnt early on to compartmentalise. I realised I was tougher and more resilient than I ever thought."

Her marathon trek though the desert heart of Australia became a simple "walk".

But then, some days were better than others.

Two months in Jude spooked at a cow in the bushes and "bolted"..

She took off taking the team with her, the lead rope pulled out of Sophie's hand. As they disappeared, the weight of being alone fell over in a heart-pumping panic.

"I was super naive. I wasn't carrying water with me, my sat phone was in the packs. I had nothing but a little pocket-knife.

" I thought they'd just pull up, but they kept spooking each other."

Gerry cans of water and a bush saved her.

"I lost sight of them multiple times. So I'd stop and listen and then you'd hear the gerry cans bashing around."

She finally found them, the lead rope snagged by a bush.

"I was terrified. We were station country but big stations, maybe a million acre paddocks. If you saw a car a day you were lucky."

"I had no idea where the nearest person would be.

Alarmingly, "We had gone cross-country that day, had gone wrong way so thought I cut across to link up with this other road and save time."

Thankfully she was able to find it after retracing her steps.

I realised I wasn't going to achieve anything by sitting in a heap and crying. Just get up and move, and stop wallowing, you can't do that, because you have five camels to look after..

After almost losing her camels and with feed running low.

"It was a big wake up call.

"I was lucky it happened before the desert or I would've had it."

Then, this year it all happened again.

This year almost happened again, on the legendary Oodnadatta Track while bound for Coober Pedy in South Australia.

Jude saddles were fitting well, and as a car passed them her saddle dislodged.

"He freaked out and started bucking. He pulled me over and dragged me along. My head was bouncing around his back legs. But there was no frigging way I was going to let it happen again.

He freaked out and started bucking. He pulled me over and dragged me along. My head was bouncing around his back legs. But there was no way I was going to let it happen again

In trouble on the Oodnadatta Track.

"I didn't want to be the girl who lost her camels twice."

"I finally managed to grab Jude, and then noticed Clayton's saddle was half off."

Or rather Clayton did, take two.

She reckons it would have been a great show for anyone watching.

She eventually got her wayward mates under control.

"So there I was, on the side of the Oodnadatta Track, my fingernail ripped off trying to re-saddle five camels.

"It took me two hours. It was a a good place to stay the night so we just got going and moved on." 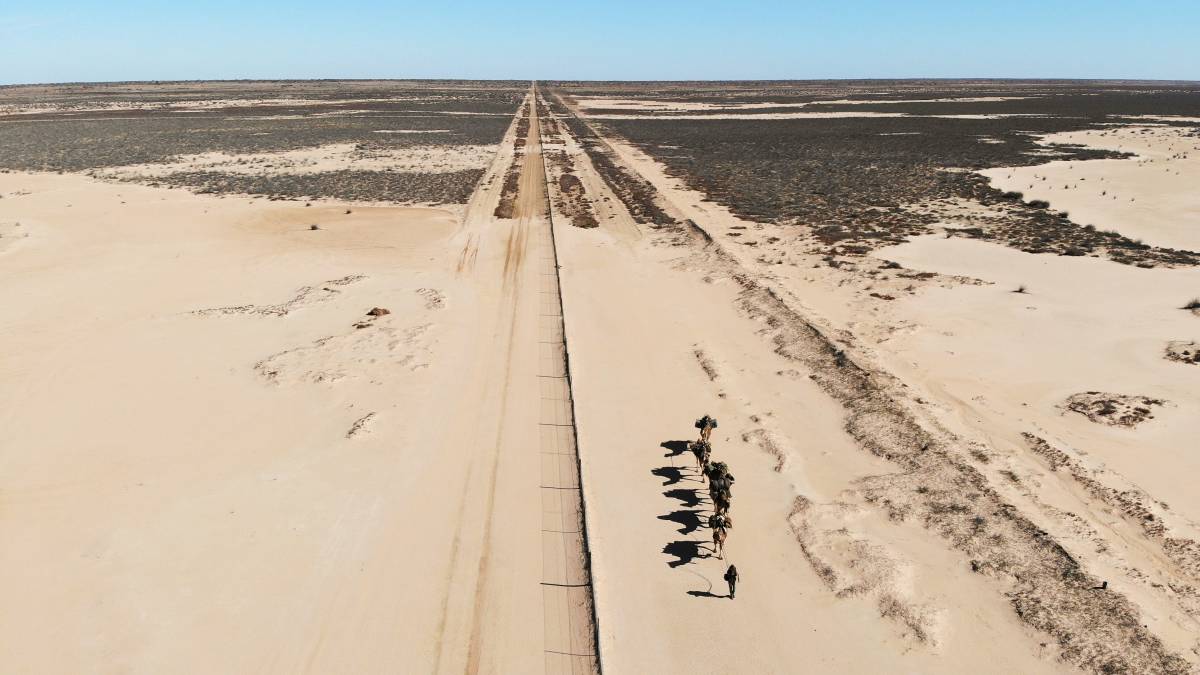 However it was a different Sophie to who she was six months previously.

"I had water on me and I always keep the sat nav with me."

And she has her dad Ed.

She rings him every few nights.

"He's a bit like my safety net. I tell where I am, where I plan to be the next day."

It's her contact with the world outside the Outback.

Although she admits everyone seems to have a different view of where that is.

"It always seems to be further east or west of where you actually are."

A mystery to be solved encountered by many travelers who wander into Australia's great heartland of desert and dust and the harsh reality of this wonderous land.

"From Hebel on, I feel as if I have stepped out of the bush into civilisation.

"The Great Victoria Desert, I often walked at night time and the early morning. It was so magical and peaceful, and awesome."