Bishop Luc Matthys was born on 3rd May, 1935 in Drongen Belgium to Antoine Henri Alfons Marie and Agnes Paulina Matthys nee Gheysens. He was the youngest of four children, with brothers Josef (Jef) and Marc and a sister Magda who passed away as an infant. His father was an engineer and his mother a teacher.

He was to have been called Dirk at his baptism but his father's uncle, the priest who administered the Sacrament, decided that he would be called Luc using the Belgian spelling of the name Luke.

The Matthys family were living in Belgium when Germany invaded Belgium in May 1940. At this time Mr Matthys was in the army. The town where they were living was bombed by stukas and the family fled to France as refugees. After the collapse of France they were sent back to Belgium.

In 1947, after having lived through 2 World Wars with Belgium in the middle of both wars, it is not surprising that Mr and Mrs Matthys decided to leave Europe and move to South Africa.

Bishop Luc attended Saint Joseph's School in Aalst in Belgium, the Brothers of Charity College in Pietersburg in South Africa and then Saint John Vianney Regional Seminary in Pretoria.

The Matthys family moved to Australia in what he called a "piecemeal" fashion - Marc & Kathleen in 1961, Jozef & Margaret in 1964 and Mr & Mrs Matthys in 1967. Bishop Luc was last when in 1976 he was accepted a priest in the Archdiocese of Melbourne.

Bishop Luc was a family man. He cared for his parents and he looked after his mother when his father moved into care. He was a much loved brother and brother in law involved in their lives. He was part of the lives, both in Johannesburg and Melbourne, of 11 nieces and nephews plus 33 great and 10 great great nieces and nephews.

Bishop Luc loved to throw out a controversial question or statement at family gatherings and would then sit back and enjoy the heated discussion that followed.

He kept in contact with his Flemish cousins and several travelled to Australia for his consecration as a Bishop. He never lost his affinity with Flanders and he included the Flemish lion in his crest. He was honoured in his parish of birth, Drongen, with a celebratory Mass on the day of his installation and an official welcome celebration when he later visited the parish. 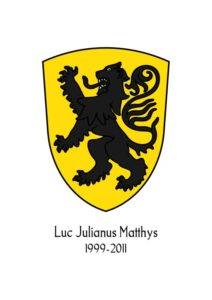 In a message to parishioners as new Dean, on the first Sunday of his appointment, he wrote:

"I come among you as a priest, to serve and to minister to the spiritual needs and expectations of the many people who frequent Saint Patricks.

"This I would do by preaching the Word of God, offering the Sacrifice of the Mass and ministering the Sacraments, listening to the people, and in many other ways that a priest serves, in this, as in the other parishes of the Archdiocese.

"As I write these lines on the feast of Saint Monica, let us recall with gratitude the gift of faith from our own mothers, and place ourselves once again under the protection of the Blessed Virgin Mary, our heavenly mother."

On 17th March, 1999 Pope John Paul II announced that Father Luc Matthys had been appointed as the 9th Bishop of the Diocese of Armidale. His consecration took place on 14th May, 1999 with Cardinal Edward Clancy, the Metropolitan, the principal concelebrant.

In his time as Bishop he added confirmations, parish visitations, debutante balls, blessings of buildings and attending meetings within the Diocese and with the Bishops to his ongoing serving as a priest. He ordained to the priesthood in 2002 Father Anthony Koppman, in 2009 Fathers Stephen O'Shea, Roel Llave and Paul Aguilar, in 2010 Father John McHugh and in 2011 Father John Macdonald. In 2006 he ordained Peter Harrison to the Permanent Diaconate.

On reaching the age of 75 in 2010 he submitted his resignation to the Holy Father who in turn asked him to remain in the Diocese as the Administrator until his successor was appointed. This he did for almost two years until February 9, 2012 when he ordained Bishop Michael Kennedy as his successor, the 10th Bishop of Armidale.

Bishop Luc moved to Nazareth House in Tamworth living there in an independent unit. In October 2019 Bishop Luc's health began deteriorating and he moved into a room within the residential aged care section of Nazareth House. For the next 14 months Bishop Luc was cared for at Nazareth Care by the Sisters and the staff.

After Bishop Luc moved to Armidale, he became an Australian citizen. He also decided to change his previous plans to be buried with his parents in Melbourne and instead decided that his grave would be in the grounds of the Armidale Cathedral. He also decided and left instructions, in writing, that there would be no need for a eulogy at his funeral Mass.

Bishop Luc died on Australia Day in Tamworth Base Hospital after unexpectedly suffering a stroke the day before.

A Vigil Liturgy will be held on Thursday night at 6pm and then his Funeral Mass is Friday at 11am.

All public are welcome to attend, however, due to Covid restrictions, RSVP's are mandatory and numbers are limited. Please contact the Armidale Diocese Chancery office if you wish to attend.

we entrust Bishop Luc to your mercy.

You loved him greatly in this life:

now that he is freed from all its cares,

give him happiness and peace forever.