Local stakeholders had their say in front of a NSW Legislative Council Inquiry last week, looking into the rationale for and impacts of three proposed dams and other mass water storage projects in the state. On Monday the proposed Mole River Dam west of Tenterfield was the focus.

The inquiry committee is a cross-party effort, chaired by The Greens' Cate Faehrmann and including members of Parliament from the Animal Justice, Labor, Liberal and Nationals parties. It has sweeping terms of reference, investigating the need for the projects, including alternative options, as well as the economic rationale and their environmental, cultural, social and economic impacts.

Its final report is due June 15, before Water NSW is scheduled to deliver its Mole River Dam's strategic business case in the latter half of 2021.

Julia Harpham said she was representing the views of the Mingoola Progress Association and community who are seeking evidence-based answers to more than 50 identified concerns.

"Many are opposed and many more are unable to make a decision because of a lack of information," she told the committee.

She said legislation was passed in 2019 to build Mole River Dam with seemingly little background study or reference to the RWS.

"So, in our view, the legislation could thus be seen as a political knee jerk reaction to the terrible drought, without sound analysis."

She fears the legislation specifying the requirement for a final business case for the Mole River Dam limits analysis and expenditure to this one option.

"Building the dam has been deemed not viable twice in the past and the proposal presently being examined is seen as too small as a water storage to benefit downstream irrigators and domestic supplies.

"There are many other issues: social, environmental, Aboriginal heritage, cost of licences, the effects on high-flow supplementary licences and on groundwater and bores.

"Our community feels the Government ought to be considering all options, not just one in isolation. The many unanswered questions far outweigh the vague, unsubstantiated benefits expressed to us.

"As a community, we are deeply concerned about the mental health of those affected both in the inundation area and below. Their lives are as precious to us as the environment."

She went on to say that there is, of course, a finite amount of water and building a dam does not mean more water; it just means it is going to be differently regulated.

"This is a major concern to everybody. Going from unregulated to regulated in the Mole River itself will mean higher licensing costs and higher water costs. For those below the Mole River, their biggest concerns are what will happen to our water harvesting licences and the infrastructure dams we have built to harvest.

"The other major concern is, over the past few years there have been many, many bores built and the groundwater supply is unable to be assessed as to where it comes from. During the drought the bores became a bit less viable or totally unviable, so nobody really knows how their infrastructure is going to be affected."

She also relayed the concerns of downstream irrigators who may no longer receive the high river flows needed to fill harvesting dams, built at great expense.

Responding to a query from MP Mark Pearson, Mrs Harpham said she's not aware of anyone from the valley lobbying for a dam. Tenterfield Shire Council is a supporter, but she condemned the cost of pumping water 26 miles uphill to relive water shortages at the township.

Ecologist Wendy Hawkes said she despaired that the country's natural resource management seems stuck in the 1950s, as exemplified by these dam proposals, citing efforts in other countries to instead remove dams.

"The downstream impacts of dam operation will be enormous," she told the committee.

"This, notwithstanding the assessment of these impacts on a range of ecosystems including a number listed as threatened is, at best, a governmental afterthought."

The Mole River Protection Alliance's opposition to the dam is well-known and its convenor Kate Boyd took the opportunity to reinforce the alliance's position, saying the the adverse impacts and higher cost of the dam would greatly outweigh the limited benefits.

She said there's no indication that the business case will include any substantial assessment of downstream impacts. She and others pushed for the business case to be made public before there's any further commitment to the project, to allow for public comment.

"We do not wish to wait until the environmental impact statement is prepared to have a last-minute opportunity to make comments when the Government may have already made its mind up."

Later in proceedings Water Infrastructure NSW, Department of Planning, Industry and Environment CEO Anissa Levy said whether or not the business case is made public is a matter for the Government.

Alliance members and affected landholders Bruce Norris, Rob Caldwell and Sandra Smith also had their say, Mr Norris pushing for the business case study to investigate the current and potential level of tourist activity as an un-dammed river compared to that of a dammed river.

"I believe that the natural flow of this river has far more economic benefit in its potential tourism than that of a dammed river to provide extra water for farmers," he told the committee.

"And why is my right to farm any less important than that of farmers downstream whom this dam is designed to benefit?"

As a downstream irrigator Ms Smith said, in addition to her concerns about the consequences on the health of the river and its value as a natural habitat, the high flows when water is released will make it challenging to manage properties like hers which are dissected by the river.

"Unfortunately, with progress some people invariably have to give up something they love, but this dam is not progress in my opinion."

Mr Caldwell said if the dam goes ahead they will lose all the best assets of their property, leaving only the hills on either side of the dam.

All three landholders noted that any advantage from a downstream push to grow higher-value crops like nuts to justify higher water security costs would be undone by these permanent crops requiring more water.

Mr Pearson asked how the farmers managed during times of water shortage, despite not supporting a dam. Ms Smith said when there's no water she doesn't irrigate, which can mean failed crops.

"But the thing is that we expect that. That is the natural thing to happen, but it would be much more debilitating emotionally if the water was there flowing past to go to the environment or a town downstream or somewhere else, and we were not allowed to touch it."

Mr Norris agreed that it's necessary to live with the current environmental seasons that occur naturally, in some cases meaning destocking as he did.

"As somebody said, there is plenty of water down there," he said. "They are just using it for the wrong things."

Border Rivers Food and Fibre executive officer Tim Napier was next on the roster, saying his group cannot see how the dam is going to stack up economically, purely on the basis that it is not creating any new water.

"It is only managing the existing that we already use in a slightly different way," he said.

Ms Duroux said local elders have evidenced more cultural heritage on the proposed dam site than has been reported, feeling that the consultants had not respected the knowledge offered to them gathered over generations.

"Our cultural expertise has often been disregarded as not expert as the educated archaeologists and anthropologists that have been involved," she said.

"As we all know our knowledge is not learnt in books, it is cultural knowledge that has been handed down to each generation and it is knowledge that I have a lot of confidence in the truth of it."

Ms Duroux said there is a cave on site with bones that were deemed to be of animal origin with no testing, evidence of clay balls used for cooking that were found to have been tossed out of the way, and marker trees defining boundaries that have been ignored. 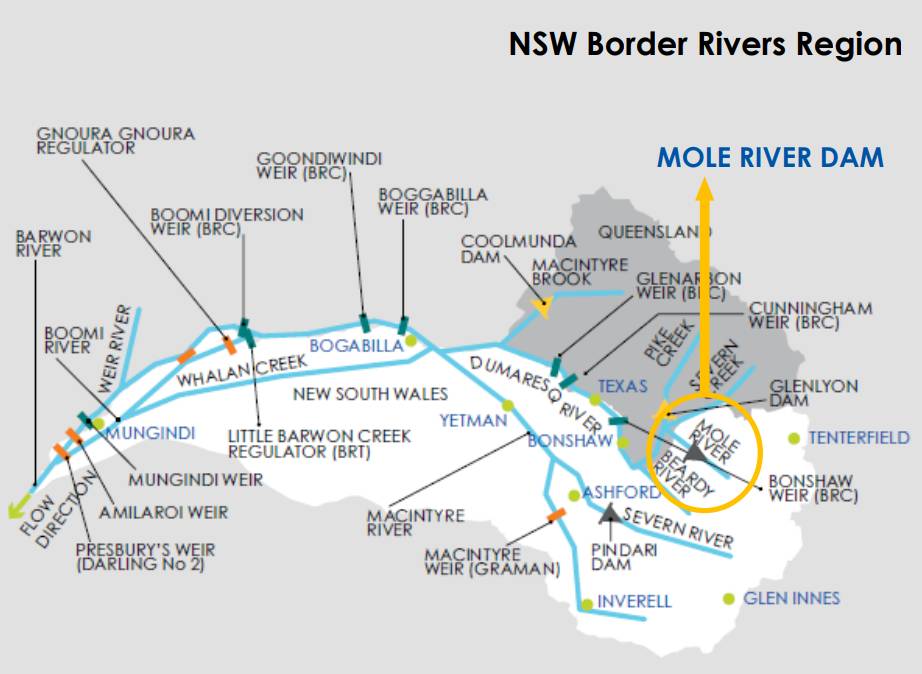 Local landholders are expressing concerns that the expected benefits to the Border Rivers region won't be realised. Diagram: WaterNSW

Ms Levy is keen to receive more information on the accusations, and said action would be taken if they proved correct.

While the other respondents appeared via videolink, Tenterfield Mayor Peter Petty faced the committee in person. He said his council is fully supportive of the business case going forward to see if the dam is a goer or not.

"That is the best way to do it: have a look at it, talk to all the effected people, talk to the Aboriginal community and then move forward."

He said the opportunities into the future for the dam are untold.

Cr Petty told the commission that he felt the 2017 Jacobs report which found a dam unviable did not go deep enough and wide enough in what it did review.

"Yes, it is a 100 gigalitre dam for the design (currently being considered) but there is potential for that to be 200 gigalitre. It is only a raising of the wall that will get it there."

He said there would be no increase in water rates for Tenterfield residents to pay for the dam, as it is a dam for irrigators. Having said that, he would love to explore the potential for the dam to provide urban water back to Tenterfield and across the border.

When pushed on how council had addressed indigenous concerns, he said its Aboriginal Advisory Committee, which he chairs, would be the appropriate place to raise them but that neither he nor anyone else had.